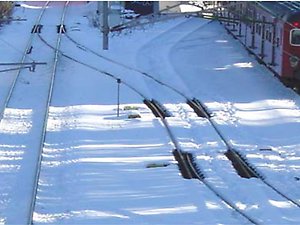 Switch Points are the portion of the rail track that a switch machine moves to alter the path of a train. The switch points can be made immobile by snow and/or ice which render the switch ineffective at altering the path of the train. This will cause a signaling system to stop the train and indicate a switch failure to the train dispatch system and the train engineer driving the train.

To avoid these winter time calamities railroads and transit systems worldwide have adopted heating systems to address the snow and/or ice that can hamper rail travel and transportation.

There are two separate parts of a switch point heating system: